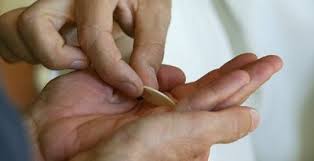 Cardinal Robert Sarah, who is the senior Vatican official responsible for the liturgical practices of the Roman Catholic Church, has stirred things up in the Catholic blogosphere.  In a forward he wrote for a book on Eucharistic theology, he stated his belief that reception of Holy Communion in the hand, and standing, not kneeling and on the tongue, is a desecration of the Sacrament.  He states that the practice helps Satanic powers disrupt the work of the Church.

Now, keep in mind, Catholics  have been allowed to receive Communion on either the tongue, or in the hand since the 1960’s.  What is important is the disposition of one’s mind and soul.  I have received in the hand, since it was allowed in this country since the 1970’s.  I have helped distribute Holy Communion, as both an Extraordinary Eucharistic minister, and as a Deacon.  I have witnessed people of faith come up and reverently receive the Body of Christ, some on their tongue and consuming it, or in their cupped hand, and then consuming it.

What amazes me, is that after all this time, this is still an issue!  Looking back, I found a 2015 post I wrote, covering basically the same ground.  I have hoped that we had learned to accept that both approaches are valid, are holy, and expresses our love and devotion for our Savior.

2 thoughts on “Communion in the Hand – An Issue Again?”

This site uses Akismet to reduce spam. Learn how your comment data is processed.