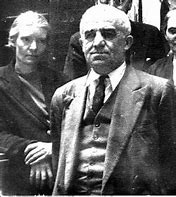 On May 1, in the year 1933, a Socialist group was holding a May Day demonstration in New York City. The Great Depression had the nation in it’s grip. The demonstrators were protesting very strongly against the bankers, and capitalists they blamed for this economic disaster. On the edges of the demonstration, a small group of men and women were selling copies of a newspaper, for a penny. It was “The Catholic Worker,” and it heralded the beginning of a Catholic social movement by the same name. Co-founded by Dorothy Day, a Catholic convert, single mother, reporter, author and socialist; and Peter Maurin, former religious brother, philosopher, and traveling vagabond. They introduced a radical way of living the Gospel of Jesus Christ.

They established “houses of hospitality,” where the poor would be received as friends, brothers and sisters, fed and given shelter. They spoke out for the poor, powerless and downtrodden. They and their followers, down through the years, have worked to make the world a place “where it was easier to be good.”

The Catholic Worker continues this work, through autonomous Houses of Hospitality scattered throughout the country and the world. They have a different measure of success. If only one person is welcomed, clothed, and fed, it has been a good day. If they have gathered together for prayer, to reflect and discuss what it means to radically love the Gospel of Jesus Christ, it has been a good day.

The Duty of Delight: The Diaries of Dorothy Day by Dorothy Day
My rating: 5 of 5 stars

Dorothy Day has become one of the famous lay American Catholics. In 1933, with Peter Maurin, she co-founded the Catholic Worker movement; a movement whose aim was to remake American society; socially, and economically, in the light of the Gospel of Jesus Christ. This diaries gives one a look into the mind, heart and soul of Dorothy Day, during the many decades she guided, and inspired the CW movement.

It provides a intimate portrait of an activist, organizer, writer, mystic, mother and grandmother. And also allows one to encounter the very human person that was Dorothy Day.

View all my reviews

I am just now beginning to reflect and put into words what I have taken away from Pope Francis’ visit to the United States.  What I would like to first write about is the Holy Father’s speech before the joint session of Congress.  I was floored by his references to four Americans; President Abraham Lincoln, Reverend Martin Luther King, Jr., Dorothy Day, and Thomas Merton.

Growing up, the only thing I knew about Abraham Lincoln was that he led the country through the Civil War, and that he freed the slaves.  It was not until I watched Ken Burns’ documentary: “The Civil War,” that I came to appreciate the depth of Lincoln’s character, his determination, and his sacrifices.  When he began his presidency, he was not a fervent abolitionist.  He believed that if he could restrict slavery to the Deep South; keep it out of the new territories, it would die out from economic pressures.  When the Civil War began, his primary concern was to preserve the Union, even if it meant keeping slavery.  However, as the war continued, with the vast amount of blood spilled in the conflict, Lincoln came to realize that a higher cause needed to be recognize, the cause of freedom for all persons in America.  He expressed this higher cause in his Gettysburg Address, calling for “a new breath of freedom.”  It began with the Emancipation Proclamation, which freed the slaves in the Confederate States, and concluded with the passage of the Thirteenth Amendment, which ended slavery forever.

It was to further the cause of liberty that brought Martin Luther King, Jr., to take on the mantle of leadership of the Civil Rights Movement.  I grew up during those tumultuous years, and was somewhat aware of the importance of Reverend King, and the Movement.  My admiration for him grew, as I began to read biographies, and watch documentaries about him.  I remember watching a docudrama series about him when I was in seminary, which had an effect on me.  The last movie I saw about MLK, was the film “Selma.”  It was a film that brought home to me the sacrifices, the sufferings that those marchers experienced as they headed to Selma, Alabama.  Martin Luther King, Jr. indeed had a dream of liberty for all, a dream that would be fulfilled by nonviolent action.

Nonviolent action was part and parcel of Dorothy Day’s work.  I cannot exactly remember when I became aware of her story.  Dorothy Day always had a passion for justice for the poor and oppressed.  As young adult, she reported for various socialist newspapers, and was a suffragette.  As a young adult, she was known for living a bohemian life style; and having some love affairs.  One of these affairs resulted in a pregnancy, and an abortion.  Day believed that the abortion caused her to become sterile.  While living in New York, she entered into another relationship, this time with an anarchist.  She discovered that she was pregnant again; something about that realization caused her to experience a conversion.  She had her baby girl baptized, and then she herself was baptized into the Catholic faith.

Still very much the social activist, only now from a faith perspective; she, with Peter Maurin, founded the Catholic Worker Movement.  They published a newspaper, “Catholic Worker,” which had columns about worker rights, Catholic social teaching, and care for the poor.  Putting theory into practice, she organized “Houses of Hospitality,” where the poor and hungry could find a meal, and a comforting embrace.  I visited one such house in New York City, St. Joseph’s House, which is considered the unofficial headquarters of the movement.  I was in NYC, testing a vocation to the Franciscan Friars.  One of the friars had a connection with the House, and brought a group of us over for a visit.  Dorothy was in residence, but was ill and confined to her room, so we did not get to meet her.  We were given a copy of her autobiography.  After I read through it, I found myself looking for and reading many of her books (she was a prolific writer).  I would like to say that I was inspired to go out and volunteer at a soup kitchen, but that would be a lie.  I could make the excuse that there was a lack of opportunity; but the truth of the matter is that it would have been way out of my comfort zone.  I am trying to get out the box I find myself in; I try to provide financial support to St. Joseph House.  And I am trying to see the world through the lenses of Dorothy Day.

Finally, Pope Francis mentioned the Trappist monk, Thomas Merton.  Born to an artist couple, he grew up in both United States and Europe.  He was baptized into the Church of England, though his family was not that religious.  He attended Cambridge University, but was not a very good student, living a very wild lifestyle.  He eventually found himself studying at Columbia University in New York City.  It was there that he himself had a conversion experience.  He received Catholic religious instruction, and was baptized.  He would later discern a call to the monastic life.  He entered the Trappist Abbey of Gethsemani, in Kentucky, USA.  He wrote an autobiographical book about his life, conversion, and the development of his spiritual life.  It became a best seller, and he became the most popular Catholic spiritual writer in the United States.  He also wrote about social justice issues, and anti-war and peace matters.  Later in his life, he explored what Eastern religions could teach Christians about meditation, contemplation, and the spiritual life.  He pursued dialogues with Eastern spiritual masters.

My encounter with Thomas Merton came during my seminary days.  Reading his books on prayer and contemplation, I discovered a desire for a more intense spiritual life.  Merton became one of my guides, especially through his journals.  Truth be told, it is still a struggle for me, even at this point in my life.  Issues of discipline, and a very active mind, (I call it the monkey mind, skittering from one thought to another!)